Interfacial water in biology: Peptide dynamics of biomimetic Elastin
You are here: Home

Water is much more than just an inert solvent for proteins. On the contrary, there is growing evidence that rather water is heavily involved in the function of various proteins at a fundamental level (see also a related Feature Page in this Media Gallery). This very interplay is one of the aspects that are in the focus of the Joint Research Group on “Interfacial Water” at the Universities of Bochum and Dortmund (DFG Forschergruppe 436 “Polymorphismus, Dynamik und Funktion von Wasser an molekularen Grenzflächen”). A particularly interesting class of systems pioneered by Dan Urry are the so-called elastins which consist of globular proteins in vertebrate elastic fibers, as found in vascular walls, skin or lung tissue. They allow for reversible deformations upon mechanical stress by virtue of their unique viscoelastic properties in the water-swollen state. Most interestingly, elastins are found to become more compact (“folding”) upon heating above ambient temperatures, whereas normal proteins unfold within this temperature range (“denaturation”). 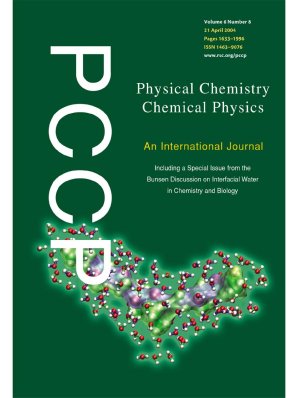 The term “inverse temperature transition” (ITT) was coined for this apparently paradoxical change from a “disordered” (extended) to an “ordered” (folded) conformation upon heating. Only when heated to much higher temperatures (close to the boiling point of water) do elastins unfold. This peculiar behavior of elastins makes them a very convenient model to study the folding and unfolding of proteins in the stability range of normal liquid water.

Still, studying such complex dynamical phenomena with real elastins is hindered by various complications, whereas much smaller biomimetic model peptides might be better suited for controlled investigation. Indeed, even only eight amino acids connected by peptide bonds in a certain sequence, that is the octapeptide GVG(VPGVG), has been previously shown to share very similar properties with much more complex elastin-like biomacromolecules. (G: glycine, V: valine, P: proline). What is crucial for biomolecular computer simulations is that these systems are small enough to simulate them for something like a 100 nanoseconds as a function of varying external parameters such as temperature or pressure, adding up to several microseconds in total, as well as taking the solvent water explicitly into account. Only sufficiently long simulations allow these short polymers to fully relax, to equilibrate and to explore the revelant phase space in view of some very slow relaxation modes that involve large amplitude motion, which might be relevant for the folding/unfolding dynamics.

Using the powerful Principal Component Analysis (PCA) technique allowed one to extract out of the many modes present the most important one which contributes the most to the overall conformational dynamics. Such a mode depends in an intricate way on all atoms coordinates in the molecule and is called “reaction coordinate” in chemistry or “order parameter” in physics. 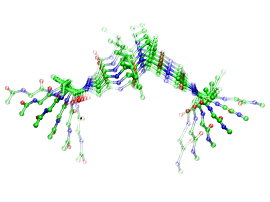 Such a mode is displayed here (see Fig. 2, click in the image for a dynamical animation of this mode) for the octapeptid and can be characterized as an opening/closing motion, where by the amino acid proline (recognized by the ring or loop roughly in the middle of the GVG(VPGVG) peptide chain) plays the role of a hinge (Carbon: green, Oxygen: red, Nitrogen: blue; only backbone atoms are used). In addition there is a small twisting component present and this mode accounts for about 40% of the dynamical motion. Such biomolecular simulations necessarily rely on valence force fields to model the protein-protein, water-water and protein-water interactions.
Fig. 3: 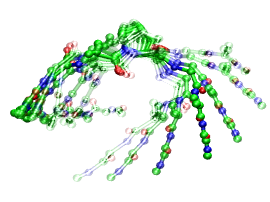 Using a different force field (see Fig. 3) OPLS-AA/L together with TIP3P water instead of CHARMM-22 with TIPS3P as in Fig. 2 yields a qualitatively similar scenario, although differences clearly exist in the details of the motion. Finally, the combination of the GROMOS-43a1 force field for the peptide with the well-known SPC water model (see Fig. 4) again leads to clear opening and closing motion. The twisting contribution is much more pronounced in this case, however it mostly affects the termini of the peptide in such a way that the hinge-motion involving P is still dominant.
Fig. 4: 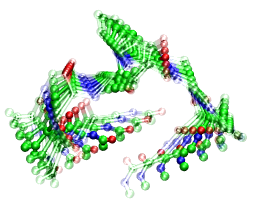 Once such a mode is singled out by the PCA it can be studied as a function of temperature. The analysis shows that indeed the astonishing ITT behavior of real elastins is reproduced: this octapeptide intially closes upon heating to ambient temperatures (which could be called the “folding regime”) and eventually opens again at much higher temperatures (which would correspond to an “unfolding regime”). In a nutshell, detailed analysis of the data suggest a simple qualitative picture of the observed transitions. At low temperatures, a relatively strong peptide-water interaction stabilizes open conformations relative to closed ones. The increase of thermal energy however decreases the stability of the extended state but has less effect on the folded conformation which is in part stabilized by peptide-peptide hydrogen bonds. Thus, there is a shift in equilibrium and one observes an increase in folded structures and hence the ITT. A second important contributing factor is the increase of peptide backbone fluctuations above the ITT and the resulting entropic stability. However, the large liberational amplitude motion of the peptide backbone can provide sufficient thermal excitation to break the peptide-peptide hydrogen bonds at higher temperatures which ultimately leads to a second, unfolding, transition.

Most interesting is the coupling between the peptide motion and water dynamics. The dynamics of interfacial water as represented by the peptide-water hydrogen bonds leads to two distinct Arrhenius kinetics regimes. In particular, the activation energy to break interfacial hydrogen bonds is higher than that in pure bulk water in the “folding regime” whereas it is much lower in the “unfolding regime”. This change in the kinetics of interfacial hydrogen bonds is correlated with a maximized number of peptide-peptide hydrogen bonds in the closed state. More recently, a first indication on changes of the peptide-water coupling during folding/unfolding was obtained by analyzing the cross correlation between peptide and water dipole moments, which features a local minimum at about the ITT temperature regime.

By comparing furthermore the temperature dependence of the peptide folding/unfolding rates (extracted from a so-called reactive flux approach to peptide kinetics) to the dielectric relaxation rate of water (obtained from the total dipole auto-correlation function of the bulk solvent) it was seen that there is a distinct change in the peptide-water dipole coupling setting in with the ITT. This might be a first indication of a so-called “slave mode” type behavior (see Fenimore et alii PNAS 99, 16047 (2002)) in the temperature regime above the ITT. This would imply that it is the dielectric properties of the solvent, water, and thus primarily its hydrogen-bond dynamics that control and drive the conformational motion of the protein. If true, this would underscore the notion of an active role of water, being the archetypical solvation environment in living cells and membranes, in the function of proteins.